Find answers to the frequently asked questions about Stormbound and Stormbound-Kitty. If you believe something else should be added to this FAQ for the site, please kindly let me know. 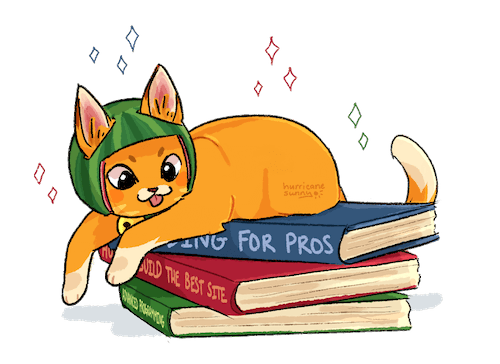 First of all, thank you for using Stormbound-Kitty, it means a lot. If you’d like to help, please kindly report any bug or oddity you find, and suggest features to me on Discord (Kitty#1909). Finally, consider buying me a coffee! Any small contribution counts. 💖

Are you working for the Stormbound studio?

Yes and no. I am contracting for the studio on a monthly basis for authoring and publishing the release notes for the game. It is a mutually beneficial partnership: Stormbound Games gets to use this relatively well-known site for official announcements, and I get paid for the work I do on official communication.

That being said, the studio only pays for the work I do on release notes. Literally everything else on the site is pro-bono work from my side. You can learn more about it and how to help in the about page.

The cards look odd/broken on Chrome. Why is that?

Chrome has an accessibility setting that prevents text from being too small. Because cards need to look “authentic” at any size, they use a tiny font size, which might not match that safeguard from Chrome.

You can deactivate that feature in Chrome’s Settings → Appearance → Customize Fonts → Minimum font size. Set it to “tiny”, and everything should look good!

Where can I get all the cards’ data?

If you are looking for a way to consume all the cards’ data to build something related to Stormbound (a Discord bot, a tool…), reach out to me on Discord and I can provide you with a JSON dump of the database.

It contains all cards in the game in their current state in a rather digestible format. Values varying across levels such as strength are authored as strings and might have to be unpacked manually (e.g. 1/2/3/4/5).

Regarding images (such as cards’ art), feel free to hot-link them from the CDN to avoid having to host them yourself. Please, be mindful of bandwidth though.

What is the license for the site?

The site is published under the GNU General Public License v3.0 . Permissions of this strong copyleft license are conditioned on making available complete source code of licensed works and modifications, which include larger works using a licensed work, under the same license. Copyright and license notices must be preserved. Contributors provide an express grant of patent rights.

The imagery all over the site is copyrighted by Stormbound Games.

Are the deck IDs the same on the site and in the game?

They are not, as the site had deck IDs as far back as March 2019, while the game didn’t offer that feature until November 2021. They are also not directly compatible since the card IDs they rely on are different between the site and the game. For instance, Green Prototypes’ ID is N1 on the site, but u007 in Stormbound. Additionally, Stormbound’s deck IDs do not include card levels, because they are always inferred by the player’s collection, which is not the case for decks on the site.

That being said, the deck builder provides a way to import a deck ID from the game, and its share feature also provides the deck ID for the game, so it can be pasted into Stormbound. This way, you can import your decks from the game to analyse and perfect them onto the site, then back into the game once you’re happy with them.

Can I add my own deck to the suggested ones on the site?

Provided your deck performs competitively, I would be happy to have it featured amongst the suggested decks. Get in touch with me on Discord (Kitty#1909) so we can discuss it.

You say my deck should be improved but it works great! Why is that?

The deck advice are determined based on heuristics and educated guesses. They do not result from a thorough analysis of the decks, and they definitely are not based on real game data. They are only generic suggestions from experienced players.

How are random decks generated?

The random deck generator is not 100% random, in the sense that it doesn’t just pick 12 cards at random. It makes sure the deck doesn’t contain too many spells or too many structures, that the mana curve is not too steep, and that combos can still work (freeze, poison…). Any deck generated like this should be playable, if not competitive.

What is the advanced card search?

The advanced card search (also present in the collection manager) relies on some sort of “tokens”. For instance, is:epic will filter out all non-epic cards. is:wp shows winter cards only. And the nice thing about this is that they are cumulative. So is:epic is:wp is:dragon yields Yowling Weavers for instance.

All in all, it should be relatively resilient. In theory, you cannot really break it per se. Worst case scenario, your search is not understood or non-sensical (e.g. is:winter is:shadowfen) and no results are returned.

I tried importing an image in the card builder but it failed. Why isn’t my image working?

There are a couple of reasons why your image could not be loaded. One of them is that the website you link it from doesn’t allow it, in which case it could be reuploaded somewhere else, or replaced with another image.

The other possibility is that what you’re linking is not an image but a web page containing an image. Make sure to right click on the image, then click on something like “Copy image address” to get the actual URL.

How does the book calculator work?

First of all, the book calculator is only an approximate simulation based on available information. This is in no way a guarantee, and any suggested outcome shared by the calculator should be taken with a grain of salt.

It calculates the probability of not getting fusion stones out of a book (other calculations are just small variations of this one). To do that, it lays down all the different “drawing sequences”: For example, ‘EEELEL’ (Epic, Epic, Epic, Legendary, Epic, Legendary) is a valid and likely sequence for a Mythic Tome. So at the core, it is a function that takes a drawing sequence and returns the probability of getting this sequence and no fusion stones out of a book.

Of course, this is correct only under the assumption that book draws work this way.

How does the value calculator work?

The value calculator, despite efforts from Derk (Derk#7109), is not an accurate representation of cards’ value. First of all, they are evaluated in isolation instead of as part of a deck. Additionally, their value is based on a single turn so structures and elders are undervalued. Finally, a lot of cards cannot be statically valued without more information about the state of the game.

The basic formula for estimating the value of a card is to take its strength or damage divided by its mana cost time its speed factor. The speed factor is either 0.5, 1, 1.5, 1.75 or 2 depending on the effective movement of a card between 0 and 4.

For sake of simplicity and/or realism, some liberties have been taken which are relevant when understanding the value output:

These cards  are currently not available in the calculator.

What is the point of maintaining my card collection on the site?

While it is understandably cumbersome to initially create one’s collection on the site, it eventually offers quite some interesting benefits:

What is the total value of the collection?

It is an arbitrary number to measure the value of a card collection. It is based on the rarity and the amount of copies you have of each card. It also take into account the initial crafting cost of all cards, which is why an entire collection of cards level 1 with no extra copies is worth about 3000 stones.

Could I write a guide and have it published?

Guides are very handy for beginners to learn more about the game and get better, so if you’d like to write a guide, that’s fantastic! Get in touch with me on Discord (Kitty#1909) so we can discuss feasibility.

On a similar note, if you happen to find incorrect, misleading or outdated information in an existing guide, please let me know so we can fix it together.

How can I get my own story published?

If you would like to contribute to writing the Stormbound lore and have your stories published on the site, you can contact me on Discord (Kitty#1909).

Why can’t I use cards created with the card builder in my battle sim?

These tools run inside your browser, there is no database behind them. When you share something like a sim or card, the data is encoded in the URL. For cards, it’s big because of the free-text nature of the name, the ability and the image URL (if any). If we were to allow custom cards in the battle sim, the encoded data for a sim would have to contain all the custom cards’ data as well. That’s unpractical.

Why can’t I benefit from the cool drag-and-drop features on the mobile version of the battle sim?

Drag and drop is not an easy thing to implement on the web, and unfortunately it gets even trickier on mobile due to the presence of scroll and swipe gestures.

Is it possible to add new puzzles?

Puzzles are made by the community, so if you would like to design your own and have them added, just get in touch with me on Discord (Kitty#1909). Just so you know, a puzzle needs:

Is it possible to add new questions to the trivia?

Absolutely! The more the merrier, so feel free to reach out and suggest questions. I‘ll add them to the trivia both on the site and in the Discord bot.