Brawl was added late 2019 as an end-game platform for relatively high-level players to spend their coins in exchange for other resources, such as rubies, fusion stones or valuable cards. In June 2021, it was revamped to be more inclusive and welcoming to all players.

Despite being still primarily aimed at high-level players with its rather steep and cost curve, it still benefits new players alike. In this guide, we will see why you should care about the Brawl regardless of your experience, and what are the best strategy to maximize output.

What is the Brawl?

The Brawl is a weekly event starting every Thursday at 9:00 AM and ending the following Sunday at 9:00 AM. It is an alternative to the “Ranked” mode with additional rules, usually buffing a unit type (e.g. Dwarf, or Raven) by increasing its strength, movement or reducing its mana cost.

Unfortunately, matches are not free to join, and get progressively more expensive as you climb the milestones. Every week, three levels of difficulty are available and one can compete in some or all 3 of them: Casual, Warrior and Ultimate.

A draw can happen when both players have the same amount of health by the end of the last turn (10th in Casual, 15th in Warrior and 20th in Ultimate).

Every match regardless of outcome grants crowns: victories grant

2 crowns. When reaching a certain amount of crowns, you get to claim the reward of the current milestone, and move on to the next. Milestones require more and more crowns to be completed. The first one asks for a meagre

7 crowns to complete, the second one

When losing 3 times within a given milestone, the amount of crowns is reset to the previously completed milestone. For instance, if losing for the 3rd time when attempting to reach milestone 5 at

1 crowns to reach a given milestone while having lost twice already, losing a 3rd game will not reset the crowns to the previous milestone. Instead, the last crown awarded by the loss will be enough to reach the next milestone.

Crowns are reset every week, and there is no way to skip a milestone or start the Brawl beyond the first milestone. The only way to move on is to fight other players, and hopefully win.

What are victory bonuses?

The idea is that after every victory in Brawl, you will be offered one of two random bonuses, amongst a set of 9 different possible bonuses (see the complete list below). Some of them will provide resources while some will improve your livelihood in Brawl by redeeming and refilling hearts.

You begin a Brawl adventure with 3 full green hearts. When you lose a match, you lose one heart (it gets emptied and red). If all hearts are lost, then your crowns get reset to the beginning of the current milestone. 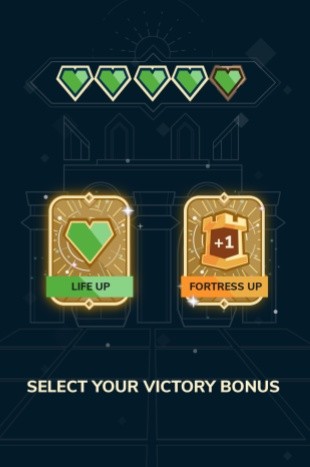 Here is the breakdown of every victory bonus:

What deck to play?

Every week brings new rules, so it is unlikely to be able to play the same deck two weeks in a row. For instance, if dwarves cost less mana in week A, but satyrs have more strength in week B, it will be necessary to adapt to the week’s theme in order to stay competitive.

Find below the existing modifiers:

A good way to practice Brawl and try decks outside of the event itself to avoid spending coins needlessly is to rely on the extended friendly matches. There is a way to do friendly games with Brawl modifiers, and it is a great way to get prepared before the real thing.

All that being said, it can be interesting to take the Brawl as an opportunity to level up cards that you would not otherwise play (provided your finances allow it), and therefore increasing your fortress level. For instance, leveling up some construct cards as a Swarm player.

The featured decks offer quite a few deck for every single Brawl, which should be a solid base for every one to compose a deck they feel comfortable with.

It is possible to analyse the mana-curve of a deck with a Brawl mana-modifier in the deck detail of the site (for example, Mirc’s deck for the spell Brawl). Additionally, it can be practiced in the dry-runner, if only to test whether mana gets wasted or if the cards flow nicely.

Once again, the Brawl is a content platform generally aimed at players with a) a solid card collection able to make a variety of decks and b) a decent amount of coins to burn through in order to reach interesting milestones. For most players, going far and high every week is not an option.

At the very least, everyone should reach the first milestone of every difficulty level which grants coins and a Humble book. It is free to play and requires only

10 crowns (in each difficulty) which is at best 2 victories, and at worst 10 losses.

If you plan on going further, it can be interesting to willingly lose a few games while they are free in order to sit at 8 or

9 crowns before having a victory boosting you out of the free milestone.

From there, it really depends how many coins you can realistically spend, and how successful you are at beating your opponents. Most players able to reach milestone 5 (the one granting interesting books) consistently would stop there, because that is the perfect sweet spot between coins spent and rewards earned.

The resources guide from Roman expands a bit more into the math behind the Brawl strategy, as well as whether or not it is wise to spend coins in the Brawl.

Staying on top of things

Given how expensive the Brawl is, regardless of which milestone you aim for, really, it only makes sense that players get hyper-cautious and invested. Countless spreadsheets have circulated for players to record their match, yielding the coins balance.