Green Prototypes is a card that confuses almost all new players. Myself as well, back in the days. How can a card be good if it gives strength to the enemy? That just doesn’t make sense. 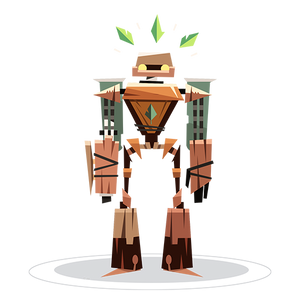 On death, give 1 strength to a random surrounding enemy unit and vitalize it

On death, give 2 strength to a random surrounding enemy unit and vitalize it

On death, give 3 strength to a random surrounding enemy unit and vitalize it

On death, give 4 strength to a random surrounding enemy unit and vitalize it

On death, give 5 strength to a random surrounding enemy unit and vitalize it

When I started out, I wasn’t on the Discord or on Reddit or the forums. I had never even heard of Stormbound-Kitty.

That was quite a long time ago however, even before the introduction of the ranks. There was a ladder—each month everyone would be reset to zero. As such, I quickly found myself matched up against very advanced players. Players with the best cards, the greatest strategies.

Imagine my surprise when I saw those strongest enemies use this card I considered useless! That’s over two years ago—in the meantime I learned a lot about this game. One thing I learned is that Green Prototypes is one of the best cards in the game, if not the best.

While not very impressive on its own, at 1 mana it’s extremely cheap. It’s basically the ultimate support unit… the list of benefits is long

Here’s my take on (some of) the reasons why Green Prototypes is so good:

For 1 mana, you can place your super strong unit closer to their base, winning an entire turn. If you’re at the mid-line with 8 mana and have Salty Outcasts in hand, Green Prototypes can make Salty Outcasts reach the enemy base.

If the enemy is near your base and you wanted to put, say, Trueshot Post, Frozen Core, Pillars of Doom or other important structure, it would most likely get focused and destroyed by some unit. By first playing Green Prototypes, the enemy would have to have a unit with 2 or more speed to even reach the structure.

Let’s say the enemy has a Trueshot Post up and running. Instead of losing something expensive, you play Green Prototypes as the most advanced unit, so they shoot at a 0-value unit. Works even better if you use Green Prototypes to kill a weaker enemy, so their Trueshot kill gives them negative value.

If you have a structure in one of the corners, play Green Prototypes on the middle one of the 3 unobstructed tiles bordering your base. They will now have to take out Green Prototypes before they can send a runner in your base, which could cost them just enough to run out of mana for the runner.

Better to have a 1 mana unit killed by Needle Blast, Ubass the Hunter, Siege Assembly, or Booming Professors than to have that damage be dealt to your base!

When there are no units alive nearby as Green Prototypes dies, it doesn’t give strength to anyone. Which means you killed a more expensive card for just 1 mana.

Playing up to 4 units in a turn can get expensive… Luckily Green Prototypes only cost 1 mana, yet still take up a spot the enemy can’t play on.

They will want to attack prototypes, just to get the strength bonus. This means that you can essentially decide where the enemy will move. Used to prevent them from advancing to your base, to make sure you can attack elsewhere or to bait them into creating a pocket for a structure.

For instance, when Green Prototypes are played on the enemy baseline, the opponent might want value from it, so they’ll attack it with a slightly stronger unit… Which you can send straight into their base with Unhealthy Hysteria.

Same concept as with Linked Golems. Instead of Debug Loggers only giving strength bonus to themselves, if you played Green Prototypes nearby it’s a cheap way to double Debug Loggers’ buff.

Additionally, Upgrade Point will buff all constructs, including Green Prototypes.

Play a 1 mana card to have an extra unit to buff with Fortification Tonic or Boosting Elixir.

Play Blessed With Brawn on them

Let’s say your Green Prototypes make it to the enemy base (it’s not a high prio target anyway) now play Blessed with Brawn on it. Unless they happen to have Confinement on hand, they’ll have to invest plenty of resources to kill the blessed Green Prototypes… or lose the game.

The more units you have, the more value you get out of Prime Oracle Bragda, even if those units are “just” Green Prototypes.

If there wasn’t a construct surrounding the space you were going to play Ubass the Hunter on, there is now—letting Ubass deal 1–3 extra damage.

I mean, even if the initial value is essentially 0, once Xuri, Lord of Life flies over them, it’s 3–7 (depending on level) extra strength for 1 mana.

For one mana, Dark Harvest gets extra targets to deal damage to.

Have a target for Call For Aid

If you have 8 mana but nothing on the board, there’s no other way to get 4 spawns from Call for Aid (Summon Militia providing only 3 spawns).

When Green Prototypes are level 4 or 5, they trigger Mystwives’ ability, which can be a huge lifesaver.

Target for the Hearth

If the enemy starts, you open with 4 mana. enough to play Green Prototypes and The Hearth. Doing so gives the Hearth a target for your next turn, instead of wasting its ability.

I’m pretty sure there are even more benefits, but for a 1 mana card, I’d say that’s already pretty impressive!

Looking to teach others and guide them towards glorious battles?
Have your own guide published.