Hello Stormbounders! A new version of Stormbound is coming early September, bringing new common cards, general game improvements, and a lot of generous offers to celebrate Stormbound’s 5th anniversary! On top of that there is a new beginning ahead of us.

Many of you have probably recently noticed a small but definitely big change in our game — the logo of Sheepyard has been changed to a new logo of Stormbound Games. We can finally proudly announce the reason: Stormbound Games is now a game studio managed by the Stormbound team and funded by its original creators — Paladin Studios.

After two years of partnership with Sheepyard, Stormbound is now under the management of the new studio “Stormbound Games Sp. z.o.o.” in Poland, owned by Paladin and the Stormbound team.

Stormbound was launched 5 years ago and is still going strong. It started as a game published by Kongregate, and later found its way to Sheepyard in Poland. Now, as a strategic step for the game and its team, we decided that it would be best to create a separate studio focused on making Stormbound the best it can be. The newly created studio, called “Stormbound Games”, consists of the whole Stormbound team that worked on the game in the past two years.

The new studio is headquartered in Gdansk. They will focus on developing and operating Stormbound, as well as exploring new avenues for the Stormbound IP. Stormbound will be published by “Stormbound B.V.”, a Dutch subsidiary of Paladin Holding B.V.

Stormbound Game’s official announcement for Stormbound’s Community:
After two years of partnership with Sheepyard, we decided that it would be best for Stormbound to continue as a separate game studio focused on making the game the best it can be. The newly created studio consists of the whole Stormbound team that worked on the game in the past two years.

We would like to extend our gratitude towards Sheepyard for reviving Stormbound two years ago. Without this initial support, we wouldn't have been able to add so many amazing features to the game.

As a new studio, we have renewed our commitment to the game. This is currently the only game we are working on, so our focus is now 100% on making Stormbound the best it can be. The Stormbound team will expand so stay tuned for updates.

Last but not least, we want to extend our gratitude and appreciation for you, the Stormbound community. Without you, this game would be long gone, and your enthusiasm and support continue to give us a clear view of the strength and future potential for Stormbound. We hope you will appreciate the updates that are coming!

We could not think of a better time to share this news than our 5th anniversary. We believe Stormbound has a bright future ahead, and we wish for another amazing 5 years with you Stormbounders!

For the very first time since Sheepyard took over the game over 2.5 years ago, the next update will not introduce any balance changes. Between the aforementioned studio change and the summer holidays, we did not find enough time to assess, introduce and test balance tweaks. Next ones in October!

Two new cat-themed cards will be introduced in September: a cat structure and a cat spell. 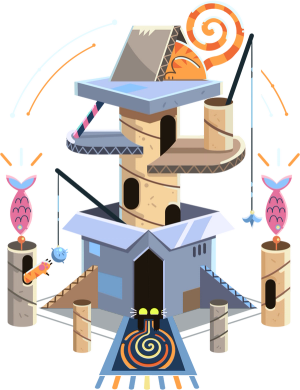 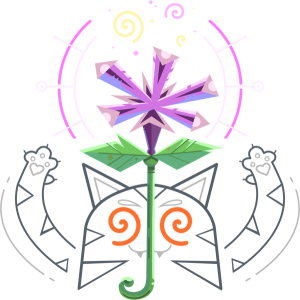 As usual, there will be $9.99 exclusive packs for every new card to get 10 copies as well as

To celebrate this special event, anyone logging into the game between September 15th to September 25th will receive the following bundle:

On top of that, all coin gains will be doubled between during that time period, except for quests. The coin cap will also be doubled, reaching

800 coins for all players, and

Last but not least, all books will contain more cards during that timeframe. Books normally holding 3 cards will be contain 4, and books usually containing 6 cards (Mythic, Heroic and Classic) will yield 8!

For those of you willing to put a few bucks into the game and supporting the creators, this anniversary event will introduce 4 special in-app purchases. They will all be available for 10 days from September 15th.

Please note that the books granted by the following offers will yield the normal amount of cards, and no more. Extra cards in tomes will be exclusive to those that are bought with in-game resources. 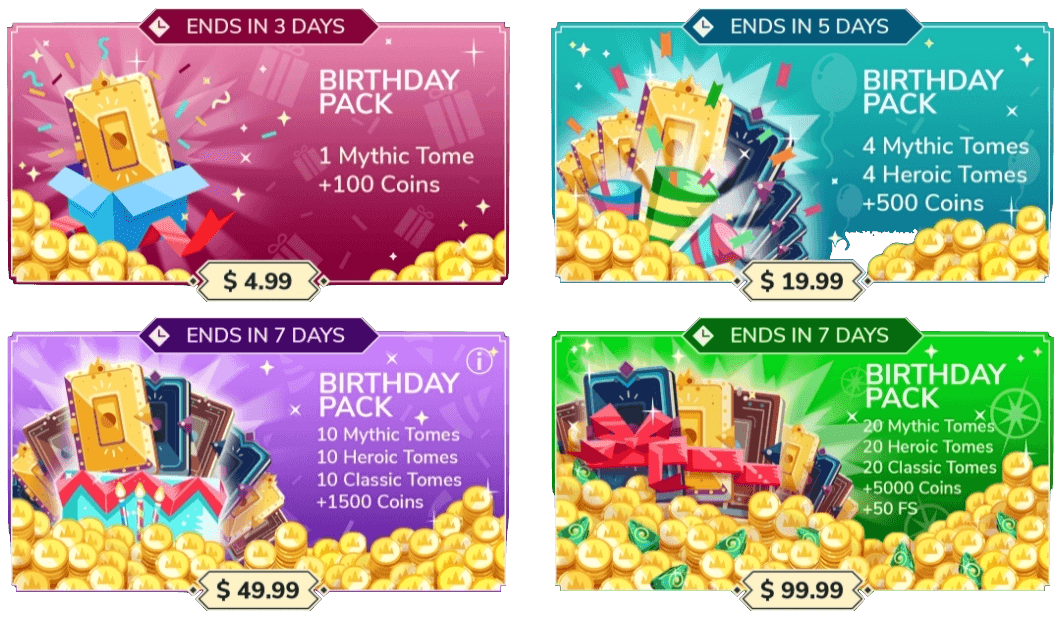 On top of that, every Ruby bundle will yield double the original amount of rubies. This is not time-bound, and effectively lasts forever until every bundle has been bought once.

Similar to what we did in the last months — we will introduce 2 new Brawl modifiers for the 2 new cards. We think it’s a good way for you to be able to try, play with and enjoy newly added cards before you start collecting them.

Like last time, a 0-mana level 1 (unless owned and leveled) copy of the new card will be added to everyone’s deck (thus causing all decks to have 13 cards).

We would like to introduce a new feature for Ranked Mode which allows you to lower your league if you feel like you don’t belong to your current league.

This will be offered if you happen to lose three battles in a row while having 0 stars at the lowest possible division of your current league. For instance, if you have 0 stars at Silver 5, you will be offered to demote down to Bronze — division 3 with 0 stars, bang on in the middle.

Note that this does not influence the chest you will get at the end of the season. In other words, you get the chest associated to the highest league you’ve reached during the season, regardless of whether you‘ve demoted or not. 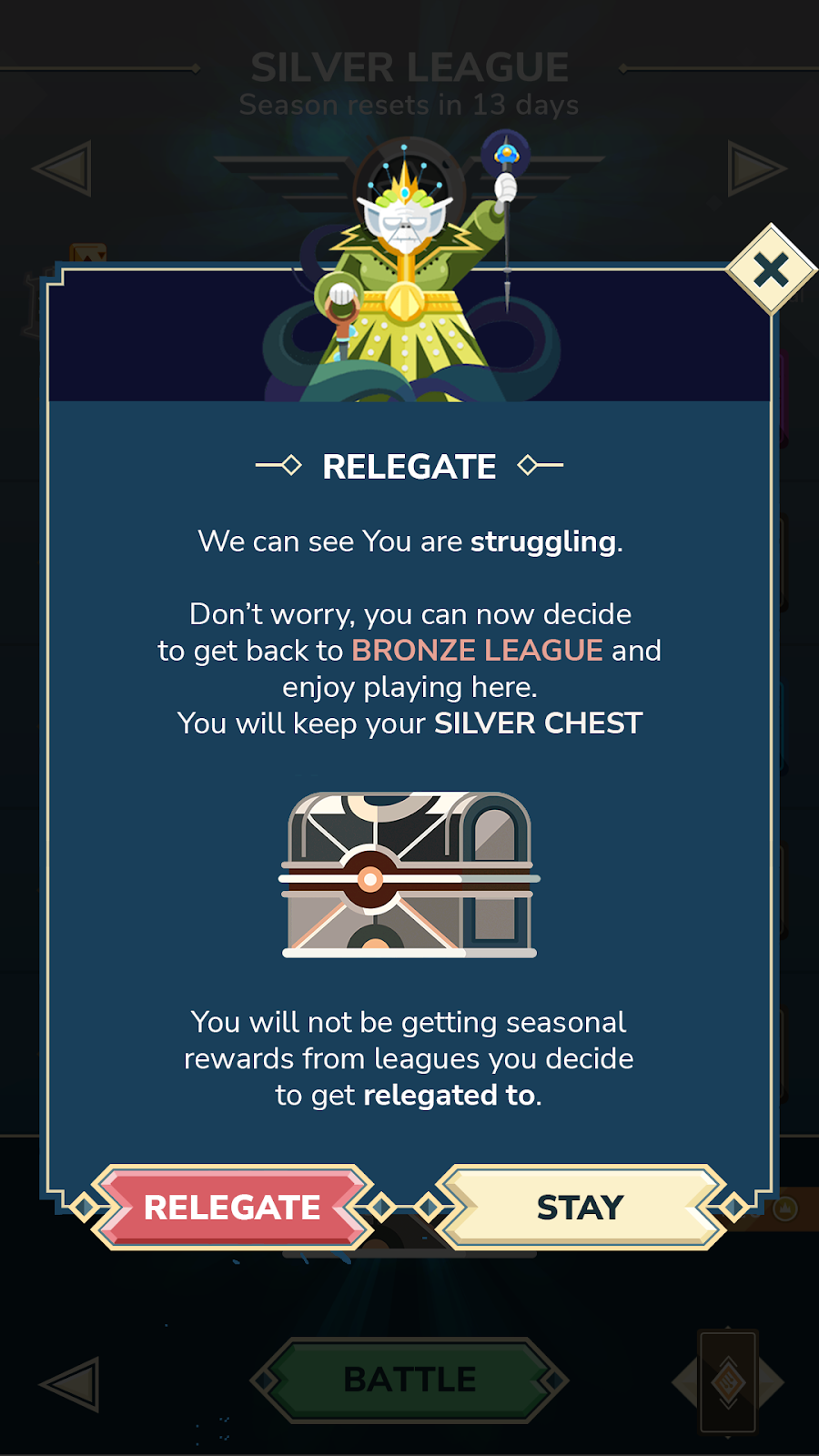 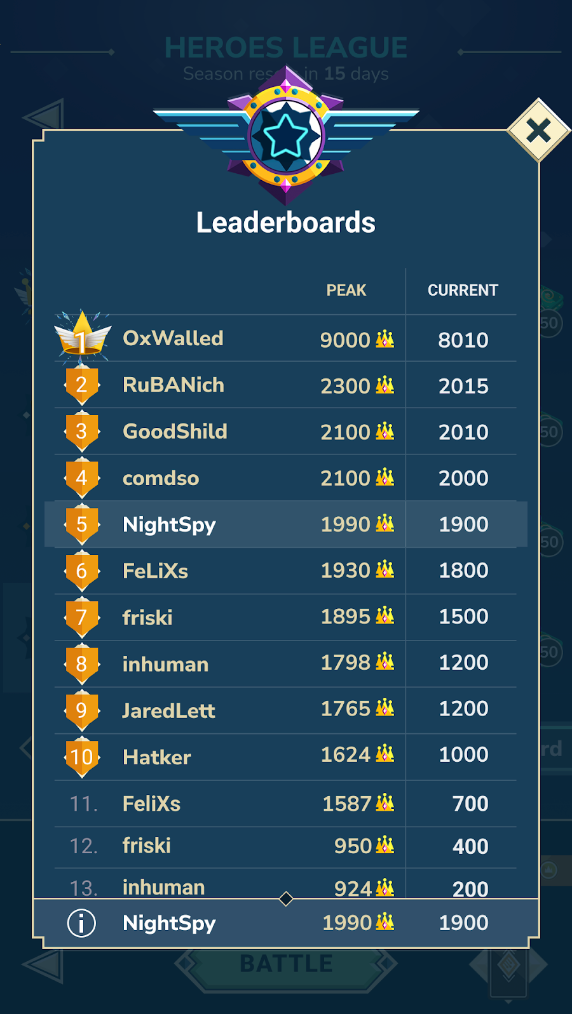 This second feature is targeted towards our end-game players in Heroes League, who often were demotivated to play at the highest level for fear of falling down the ladder.

The new Heroes League “Peak” system will save players’ highest achieved rank, which will be deciding their place on the current Heroes League board.

The new Ranked Mode features will be added to the game on September 12th. The 2 cards will be introduced on September 16th for Catnip’s Charm and September 23rd for Chateau de Cardboard.